The first question eveyone asked us when we came home for the holidays after spending three months in Europe (two months on a road trip through the Pyrenees, Alps, and all of Italy and one month trveling by train through Prague, Germany, Amsterdam, Bruges, Paris, and the UK) was this:

“What was your favorite place?”

I can’t choose what ice cream flavor I want most days, let alone my favorite place we visited in Europe. How can we choose just one place from an epic trip like that? I can, however share our top places. In no particular order, here they are:

La Verna Cavern is located near the town of St Engrâce, nestled in the northwestern edge of the Pyrenees. The La Verna Cavern is the largest cavern in the world that is open to the public. It is roughly 250m (820ft) in diameter and 194m (636ft) tall. This cavern is so big that you could fly a hot air balloon inside it (some college students did this back in 2003)! And this cave isn’t just empty space. There are two big waterfalls and an actual river inside it. 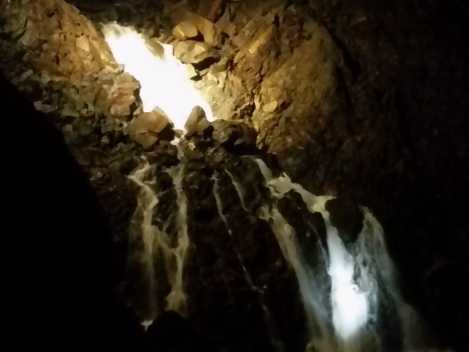 One of the two waterfalls

We heard about this cavern at a regional tourist office and went to check it out, signing up for the basic cavern tour. The tour guide found out that we rock climb and set up a spleunking tour for us the next day. In the darkness, with only headlamps to see by, we scrambled down one side of the cavern’s valley to cross the river, and scrambled up the other side of the valley to climb 70m (230ft) up a cavern wall to a tunnel. Inside the tunnel were some cool cave formations and a tall narrow canyon for us to traverse. We found a spot for a picnic lunch before turning around and retracing our steps back to the outside world.

While we were inside the cavern and tunnel, it felt like we were in a whole other world. At the end of the tour, we stood in the big cavern and the guide turned on the flood lights, exposing the beautiful color-stained walls of the cavern and the river valley below. The beauty and size of the cavern struck me again as I took in the view. After this experience, the book, Journey to the Center of the Earth by Jules Verne didn’t seem as whimsical. 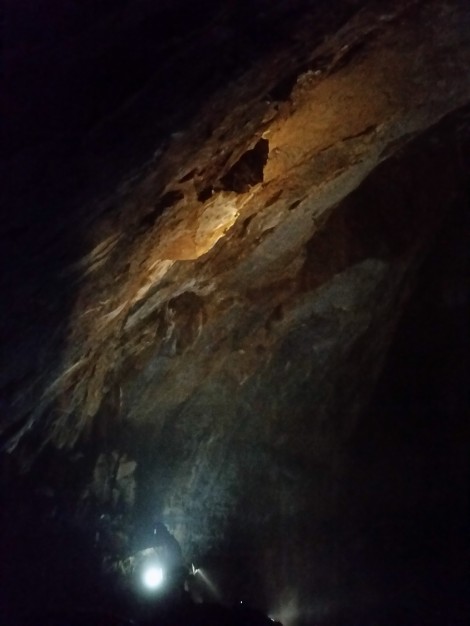 One of the cavern’s walls 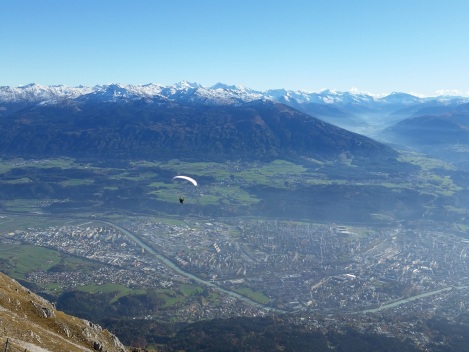 Innsbruck, nestled in the valley between the mountains

In a last minute decision, KC and I decided to make a quick detour to Innsbruck, Austria, to check out the Austrian Alps. I’m glad we did because it’s hard to not fall in love with this city. Besides this being the first city we found on our European tour with non-espresso drip coffee (aka, normal coffee), it sits in the middle of a valley in between gorgeous mountains that makes you want to sing and dance to “The Sound of Music” (which we did actually do). The city also has an awesome rock climing community which welcomed us warmly at their huge indoor rock climbing gym. 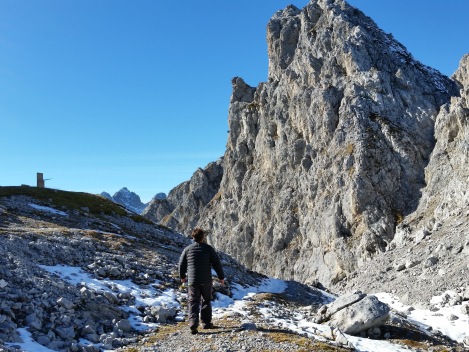 Hiking the mountains nearby the town

In addition to the amazing outdoor activities, Innsbruck has some cool culture to check out. This city has many museums, including museums on local, national, and international (from nearby countries) history, art, sounds and hearing, bells, and music. Not to mention the local castle and Swarovski Museum. The best part of all is that the city offers a cheap (~$30/person) day pass to see all these museums and includes transportation in and around the city and up the mountain.

Looking for family in Sicily

KC’s nonnie and nonna (grandparents) grew up in the same town in Sicily, but met in the US, eventually settling down in California. They left family behind in Sicily and we wanted to see if we could find extended family in their hometown. 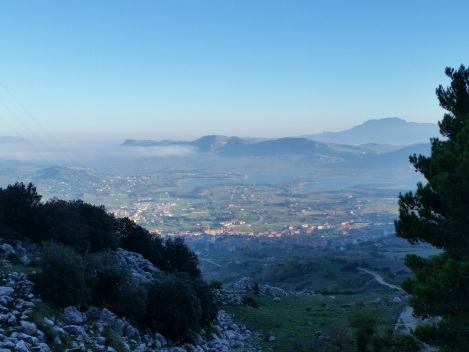 We parked the van and started our search in the local post office. From the moment we walked in, everyone in the post office was interested in us, wanting to hear our story and telling us to talk to lady working the counter. Between a translating program on KC’s phone, the little Italian we spoke, and KC’s dad translating over the phone (despite it being the middle of the night in CA), we found out that the lady working the counter is a relative of a long time family friend and that one of KC’s dad’s cousins still lived in town.

Despite having customers in the post office, she closed down the counter and told us that she will take us to see KC’s second cousin. A customer, who had been listening, volunteered her car and we all jumped in. As we drove, they offered us freshly baked olive bread. When we arrived, she introduced us before leaving us to get back to the post office. KC’s cousin and her husband were excited to meet us and insisted that we stay for lunch, which they cooked.

We continued looking for family history the rest of the afternoon throughout the town, but with no further luck. The excitement and hospitality of the town blew me away. It seemed like a scene writen for a movie.

Cinque Terre is a National Park in the north along the western coast of Italy. There are five small multi-colored towns, centuries old, inside the National Park that, up until the last fifty years or so, were connected to each other only by a single walking path. These five towns are the quintessential Tuscan towns, complete with vineyrds and olive groves.

Hiking by the vineyards with a view of the sea

We walked the path between the first three towns and took the train between the last to towns (the path was closed between these towns due to landslides). The walking path followed the coastline, often on top of cliffs and passed through the vineyards and olive groves. Walking the path between the towns and exploring the cities was a bit surreal with sights, sounds, and food.  The landscape reminded me of the Big Sur area, along the central California coast, making me think of home. 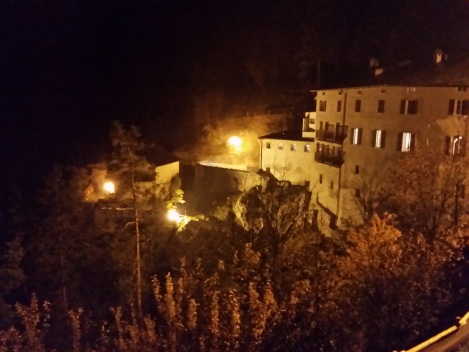 Sadly, the only photo I got from that day

This was the ultimate spa experience (and relatively cheap too, at €40/person). Located in the Italian Alps, this place was not only a magnificent place to soak (lots of different pools, some of which were outside, on the hillside overlooking the local valley and surrounding snow capped alpen mountains), but was also a place of history.

Bormio became a place to stop during Roman times for people to use the natural hot springs. The orginal Roman baths, fed by the hot springs, are not only perserved, but are in working order and you can take a hot soak in history.

Moving through history, the hot springs spas were at one point (I’m not sure when, but it includes the Renaissance time period) ran by Christian monks, practising hospitality, who invited travelers to use their baths. One such recorded traveler, Leonardoi da Vinci, has a hot suana room named after him. The monk’s church has also been preserved.

Here’s a short list of my favorite parts of the spa (theres too many to list them all):

An alley way in Lescun

All of the plces we stopped at in the Pyrenees were beautiful to hike and each area has its own cool story, but none with such a good combination of loction and story as Lescun. Besides the natural beauty and the surrealness of the foggy autumn views on the GR10, the people of this town were very hospitable and friendly, treating us almost like we were family. 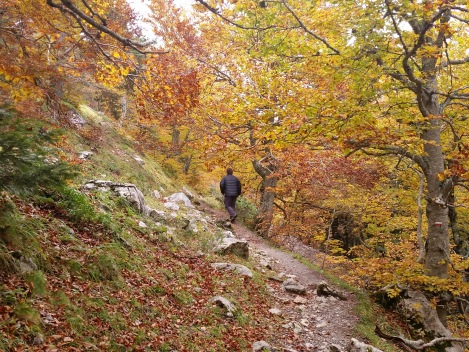 After exploring the La Verna caves, we decided to drive to Lescun, where we wanted to hike the next day. We pulled up tired, into a campground just outside the town, to find that no one was there (neither camper nor manager) and were about to pull way to find another campground, when an old couple pulled up and started picking up chestnuts from under a chestnut tree. In the best French I could muster, I inquired about using the campsite for the night. The old woman told me that her daughter runs the campround and we could stay that night.

Hiking along the GR10 near Lescun

Then she told us to follow them into town so she could show us where to eat. I was a little surprised, since we just drove through the town and the cafes, bars, and restaurants were closed. We followed her to town, were she knocked on one of the closed bars and told the manager to take care of us. We were his only customers that night, so we were served some of the food his family cooked that night for dinner before heading back to the campground.

The best meal of the whole Europe trip came from Cauterets, France. It was unexpected, as we had walked into a “ski” themed restaurant that was middle of the price range. Since it was Friday night and we had cooked all our own meals that week, we decided to go out somewhere nice, but decided to share a main entree to stay on budget. We ordered the special that night – the mutton stew and French onion soup as an appetizer. The soup was ok, but we had to keep ourselves from licking the mutton bowl clean. Not even the food in Tuscany (second best) surpassed this mountain town’s mutton. All other meals since, have been compared to the mutton stew.

(Sorry, forgot to take a picture of the stew… We were too hungry).

One response to “Top Seven Experiences from the Europe Trip”