Night had fallen before we touched down in Kathmandu and all we saw of the city on entry were the city lights. Our first real view of Kathmandu and of Nepal was the next morning, when we rushed to get across the capital city to the bus station. KC and I stepped out of our hotel onto the dusty and dirty Kathmandu streets. 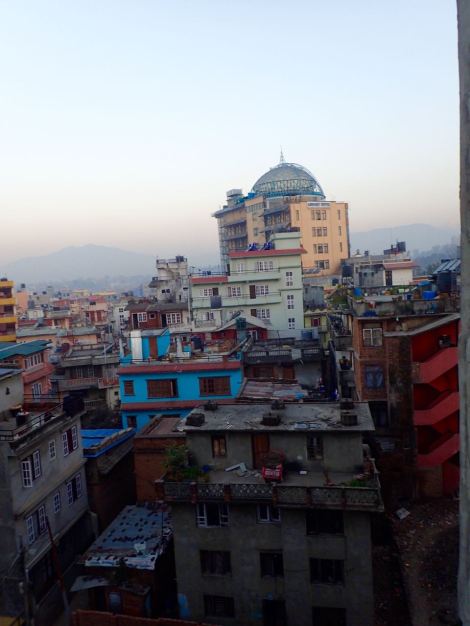 Our first view from our hotel in Kathmandu

The hotel hailed us a taxi, a beat-up old car (probably from the 1980s) barely big enough for the driver, KC, me, and our backpacks (one ended up on the roof and the other in the front passenger seat). We stared out the windows, watching the city and its people wake up with the rising day. There was a splattering of English alongside the Nepali words on the signs and small controlled piles of trash burning in the streets, a stark contrast to the super-clean streets of Singapore, where we had been the days before arriving to Nepal. As we got closer to the bus station and I could see that KC was considering turning around and making a break for the airport. Instead of running, we gathered our backpacks, paid the taxi, and searched for the ticket booth to get a direct ticket to Trishuli, where we were planning to spend the next three weeks volunteering.

The white car is what the taxis look like in Kathmandu. This is one of the busiest intersections.

When we were accepted to volunteer in Nepal the non-government organization (NGO) we signed up with – All Hands Volunteers (AHV) – sent us detailed instructions on how to get to their base, about a four-hour bus hour ride, if you catch the direct bus, from bus schedules to exact walking instructions, complete with pictures of all the turns from the bus stop to the base (this immediately impressed me about their organization). We never found the ticket booth or the direct bus to Trishuli, but got on another bus, where the young salesman (not sure what else to call him, he hung out of the bus door calling to people to get on as the bus drove) told us he could get us to Trishuli, but not directly. We threw our backpacks on the roof, hopped on the bus, and hoped that we would make it to the base.

A note about Nepali buses. They are all very colorful and are each uniquely decorated with pictures, usually of the Hindu gods and goddesses, and, due to the fuel shortage, are packed with as many people and things as the buses can physically hold. They reminded me of the chicken buses of Guatemala, but smaller in size. This particular bus was a luxury bus, which meant that it was not filled to breaking and everyone got a little bit of space, a fact I didn’t appreciate until I rode other buses in Nepal, plus it had a television. For the first two hours of the drive, the driver played some Bollywood music videos and I was able to lose myself in the music as I stared out the window, taking in views of the new country; KC, on the other hand, was constantly watching where we were going and making sure that we were headed in the right direction. The bus slowed down in some areas and some vendors tried to sell food, water, and clothes to the bus occupants through the windows, as we rolled by. I realized the Nepali took the idea of a drive-through to a whole new level as the woman sitting behind me bartered for a couple new outfits and lunch, all while we slowly made our way through a small town.

In another smaller town, the bus rolled up to an intersection. KC had been in converstation with the bus ticket salesman, who suddenly yelled at us, “This is your stop, you need to run to that bus,” pointing at a small van, “it will take you to Trishuli, but it leaves in five minutes!” We squeezed past the other bus patrons in an effort to get off the bus and waited a minute outside while KC paid for the bus ride and I caught our back packs as they were tossed down from the roof. We bolted across the street to a small 20-seater van, already filled with people and a couple chickens. Our backpacks went back on the roof and we were told to sit in the very back since our stop would be the last one. We hadn’t squeezed back to our seats before the bus took off.

There was no room. I had my smaller backpack with our water, passports, and money on my lap and I was halfway sitting in KC’s lap, with only one butt cheek on the seat. There were five of us in a back row meant for maybe three people. No room to even adjust my legs. For the next two hours, locals hopped on, squeezed into a seat or lap, and hopped off when their stop came. There were so many people that the door to the van never closed and often times, there were people hanging onto the van, with most of their bodies outside the van. I tried to take in the countryside views of a new country and world region, seeing for the first time, the rice-field terraced hills. At one point, an older woman, maybe my mother’s age, in a traditional sari, sat next to me and tried to talk to me in Nepali language.

One thing I discovered about the Nepali people that I have come to love about them is how welcoming they tend to be. The lack of verbal language didn’t get in the way of the woman interacting with me. She stared into my eyes and with gestures, was trying to say something to me about the landscape. After a minute or so, she got a couple of the younger women, none of whom spoke English, to also try to talk to me, gesturing to the windows and to KC. I imagined that they were talking about their country and asking about us. Maybe they were asking what brought us here or what we think of the countryside. I tried to respond in kind with gestures and talking in English. In any case, they smiled a lot and I felt welcomed by their desire to want to communicate, instead of rejecting me as a foreigner, something I was used to in other countries.

Trishuli in the distance

Eventually, we crossed the bridge over the Trishuli River and entered the Trishuli bus station. We paid for our ride, caught our backpacks as they were tossed from the roof and started the 45min uphill walk to the base, grateful to finally be done with the sardine-can bus ride. With the directions being very clear and full of pictures, we didn’t have any trouble finding the AHV base. Sweaty and overwhelmed by culture shock, we stumbled through the front gate and were warmly welcomed by the staff, who brought us chairs to sit in and fresh water to drink. Thus began our time in Nepal, what I consider the best part of our year-long trip.

From the moment we landed, we were taken out of our comfort zone, and once we left Kathmandu, we interacted with the people and culture of Nepal. During our three weeks in Nepal, we saw the daily struggle and joys of the people in one of the poorest regions recovering from a massive natural disaster and worked alongside them to further the recovery of the land. The volunteers and staff at AHV loved the people they work for and the people loved them back. What we witnessed and participated in Nepal was a living work of beauty; it was the hardest and most profound experience of our year-long trip.