With summer in full swing and the temperatures rising, I find myself reminiscing about all the lovely beaches around the world. Luckily, we live about a 45min drive away from a pretty awesome beach.

Here’s some of the highlights from beaches along the West Coast of North America. 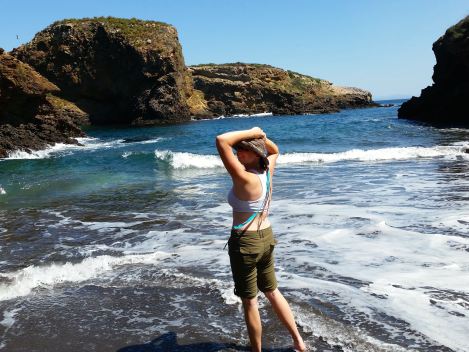 Taking in the beautiful views and cold water on my feet

KC and I spent the morning hiking along the northeastern part of the island, on a small trail maybe heading towards San Pedro Point. We noticed an even smaller trail heading away from the main trail towards what we thought were cliffs. Thinking that we could find some good views, we followed the side trail a ways and found that it was leading us down a canyon. We got into the canyon, turned a few corners and suddenly, a view of a small, hidden cove with black sand came into view. This cove was empty of people and we decided to hangout for a while. The water was too cold and wild to swim, but we took off our boots and explored a nearby sea cave (no more than one or two feet of water deep). We occasionally saw kayakers, but were otherwise alone on the beach, a rarity in California. This spot was truly a gem. 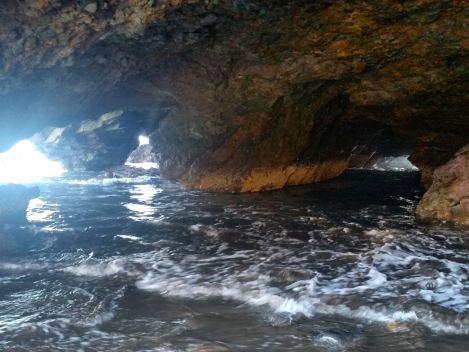 Exploring the nearby sea cave 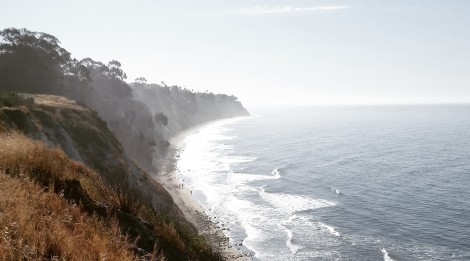 My view running along the Santa Barbara Coast

On the way to Big Sur, KC and I stopped for a short three mile run along the Santa Barbara coast, with some amazing views. The views tempted us to stay a little longer, so we grabbed some food from the car and our backpacking chairs and headed down to the beach for breakfast. 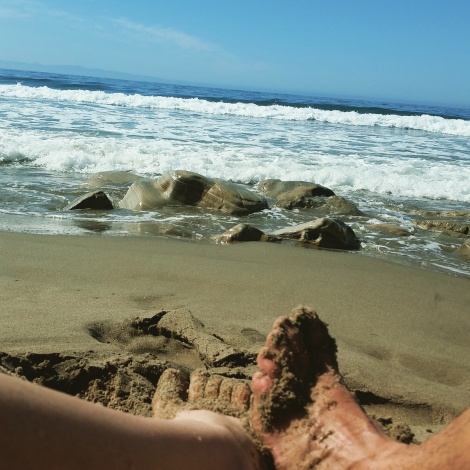 Relaxing on a Santa Barbara Beach after a morning run.

We enjoyed our post run breakfast with a stellar view and decided to go as far into the water as our knees (trying to keep our clothes dry) before getting back on the road. Even though this beach isn’t that far from where we have settle down post trip (5hrs one way), it might still be a while before we get to visit this beach again. It’s still in my daydreams. 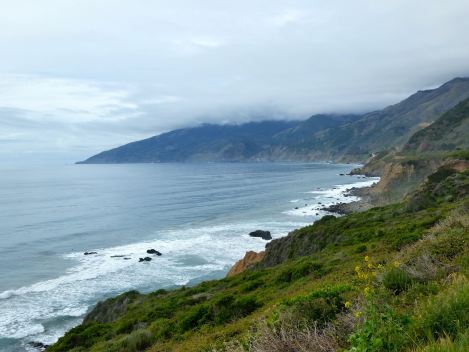 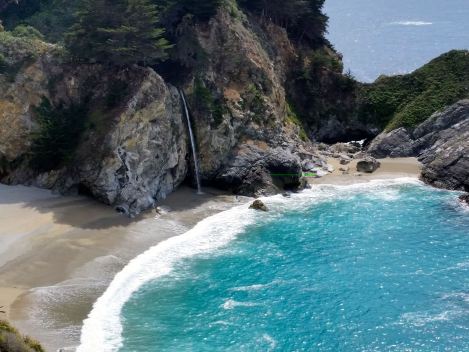 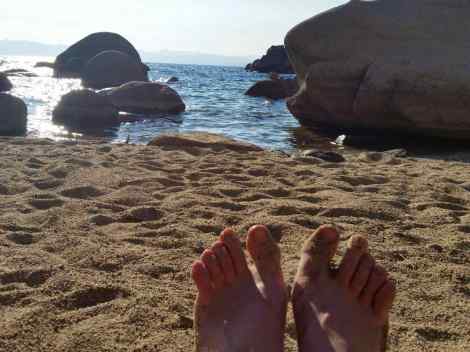 Granted this is a lake beach, far inland and set in the Sierra Nevada Mountains, but it is very nice to lay out on a towel and sunbath while listening to the waves hitting the sand. KC and I passed through Tahoe in August and took a few days to rest and enjoy the water and mountains as we were concluding the North American Tour. We swam in the cold alpine water and jumped off the granite boulders. No matter which time of year, the water is always cold. 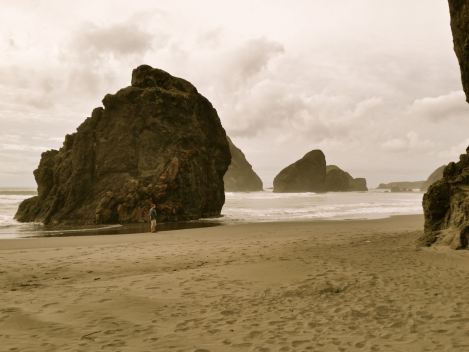 It was early April when we drove through Oregon and it was cold. We didn’t swim in any of the Oregon beaches (and I wonder if anyone swims in them during the summer with how wild the water seems to be), but they were beautiful! I throughly enjoyed seeing all the Oregonian beaches and at least putting my feet in the icy waters. 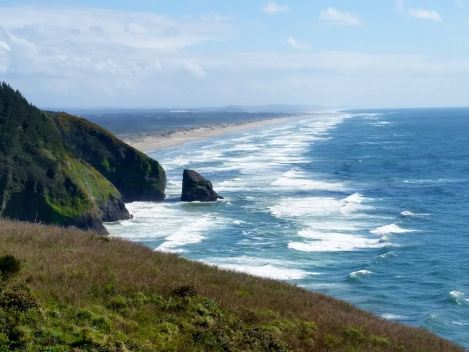 Somewhere along the central Oregon Coast 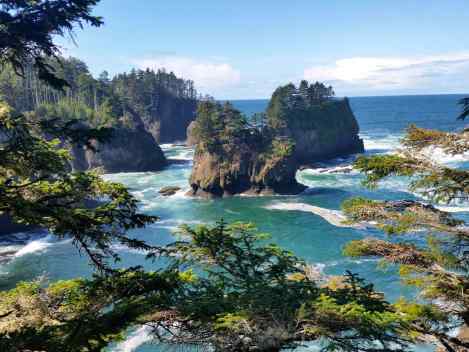 Views of the Pacific Ocean from Cape Flattery

Once we hit the Oregon/Washington border, we drove inland. It wasn’t until we did a short road trip to Cape Flattery (the western-most point of the contiguous US), that we saw any of Washington’s beautiful beaches. While Cape Flattery isn’t what you would think of when you think of a beach, it’s a beautiful representation of land meeting the sea. 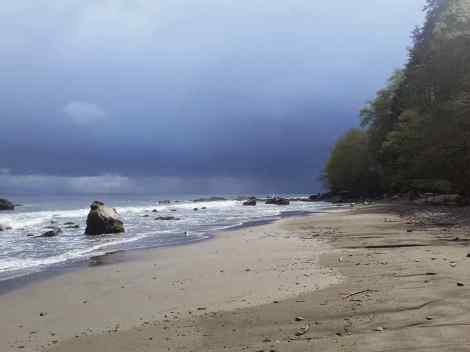 A storm in the distance off a Washington beach

On the way to Cape Flattery, we pulled off on the side of the road where we saw some beaches to explore. The incoming storm brings a certain beauty to the scene, but warns us from trying to swim in the water. This was certainly a beach to walk along the sand and enjoy the view of the incoming storm. 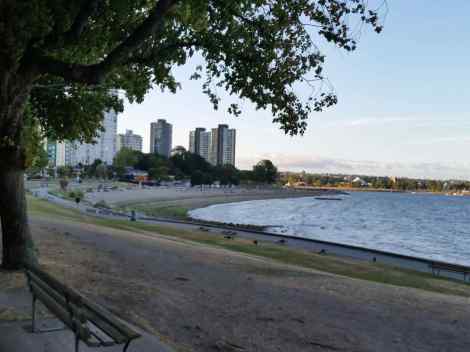 A view of Vancouver from Stanley Park

The path along the beach in Stanley Park in Vancouver, British Columbia is my personal favorite beach setting for a run. The path follows the perimeter of Stanley Park. As you run, waves crash along the side of path’s wall, sometimes splashing over. If you look to the inside of the path, you see glimpses of the forest that make up the majority of the park. 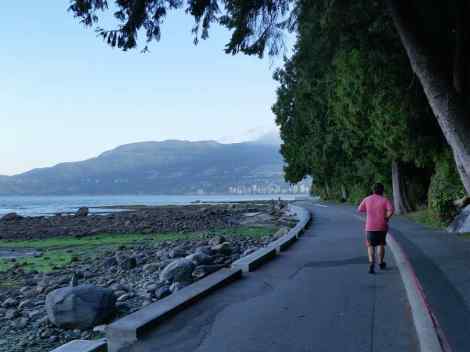 Sprawling city and suburbia surrounds the city, coming into view around each corner, contrasting with the beautiful nature. Beach runs don’t get any better than this. 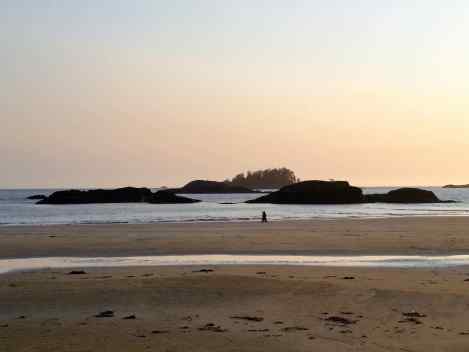 Tofino is about an eight hour drive from Victoria, British Columbia and is a remote fishing/surfing village. It has some of the most stunning beaches that I have seen and definitely the best non-swimming (unless you’re surfing) beaches along the West Coast of North America. 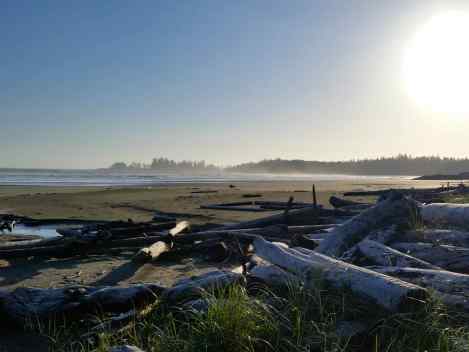 Tofino has some beautiful Beaches

We traveled all the way to Tofino, with my parents, to see a beachside hot springs. This hot springs is nestled in a small provincial park an island nearby the town. The water comes out so hot from the hot springs, that you can only soak in it where the hot spring water mixes with the cold ocean water, on the beach. (You can check out more about this hot springs beach in this blog.) 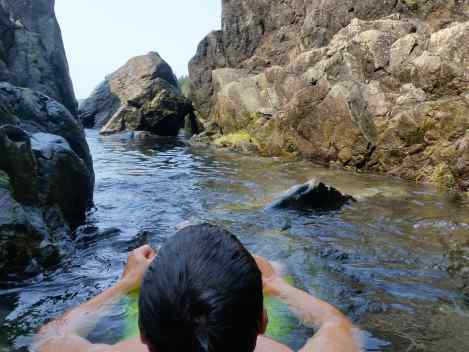 KC relaxing in the hot springs 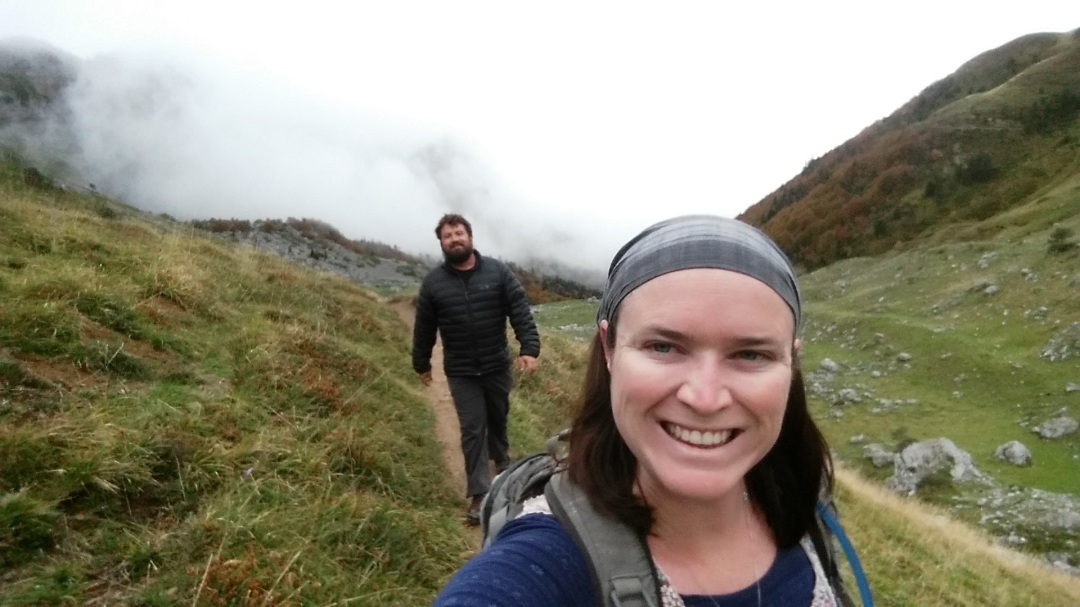