KC woke me up for this picture, which is why I look somewhat out of it

The same day rain and thunder woke us up at 4AM in Austin, we drove straight through the rest of Texas, with a short stop in Houston for a late breakfast/early lunch. The rain did not relent during the drive. We passed the Louisiana border and continued driving on.

When we crossed over the great Mississippi River, we stopped on the east bank, in Baton Rouge. This was the first time KC and I had seen the river up close (both of us had seen the river while flying over it on a plane) and crossing the river meant that we crossed the threshold from the western United States to the eastern United States. Since we had a break in the rain, we stood there and took in the view. It would be months before we would cross the river again to the west.

We continued to New Orleans. Since neither of us had been to New Orleans before (and to avoid camping in the rain), KC got us a hotel in the historic French Quarter District.

Views of our hotel’s courtyard

After cleaning up a bit, we left the hotel to explore. 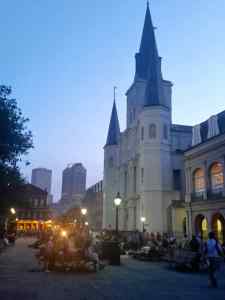 Views from walking around the French Quarter

A classic view of a Steamboat on the Mississippi

It looks like a castle at Disneyland, but it’s somewhere in the French Quarter of New Orleans 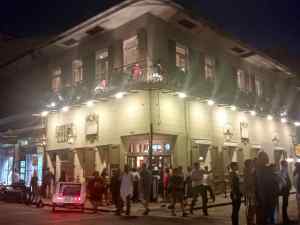 A restaurant somewhere in the French Quarter

We followed our ears to some talented street musicians and then followed our noses across the street to a restaurant. There we tried some classic New Orleans dishes, such as fried alligator and gumbo.

While In New Orleans, we had fried Alligator; tasted like chicken!

Of course, we had to try beignets! These were hot and fresh, a perfect dessert to end our rainy driving day!

We wandered back to our hotel 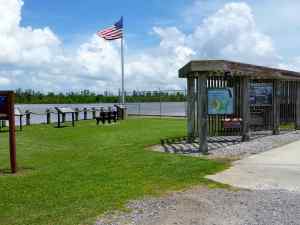 The furthest point we could go on the Mississippi Delta

KC wanted to see the Mississippi Delta, even though it was over an hour and a half drive away. After breakfast and more sight-seeing around the city in the morning, we drove down the peninsula to see the delta. We saw some amazing views at the top of the delta.

Views along the Mississippi Delta 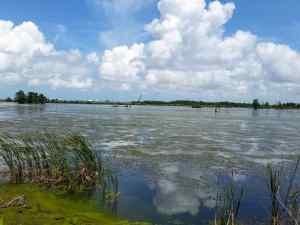 More views of the delta

Restaurant on the delta

One Last View and Dinner

As we left the delta, we stopped for dinner at St Roch’s Market, a food hall and market, for some local creole food. St Roch’s market suffered damaged during hurricane Katrina, forcing it to close. Recently, repairs were completed and it reopened. The inside decor was unique combination of turn-of-the-century colonial and modern design, a unique New Orleans combination. We sampled some of the food there, including Korean-Creole fusion food. It was delicious. 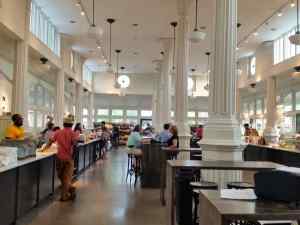 We made it to Mississippi! I’m more awake for this picture! Yay!

From New Orleans, we drove to the beach city of Biloxi, Mississippi. 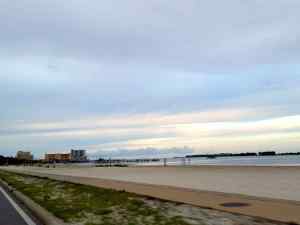 Our first view of the beaches at Biloxi, MS

We stayed in Biloxi that night and all the next day at a resort hotel. Both of us were exhausted from the rough camping nights and the long hours of driving. Since we were meeting family in a couple of days, we decided to rest one day in Biloxi. So, we spent the day running on the beach, hanging out by the pool, and wandering around the city in the relative coolness of evening. 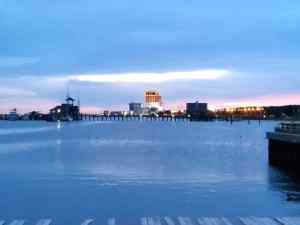 A view of Biloxi at night

On our second morning in Biloxi, we woke up early to start the 12 hour drive to Ft Lauderdale. We passed through Alabama that morning (they were the first state we encountered with no welcome signs) and stopped for a quick breakfast.

Some cool architecture in Mobile, AL

Then onwards to Florida.

We made it to Florida!

Once we crossed into Florida, it was another nine hours or so until we made it to Ft Lauderdale. It was hot and humid the whole way there, but we made with few arguments in the car. KC and I were both relieved to finish our mad dash to Florida in time to meet up with his parents.

You can check out more pictures from our Mad Dash to Florida on our Photo Journal Page.